France has four collections of Hebrew inscriptions, mostly funerary stelae. Other epigraphic texts, slabs as well as graffiti on the walls of some buildings constitute a corpus of 328 entries in 41 communities scattered throughout the territory of present-day France. They sometimes carry detailed texts with names, dates or even professions and honorary titles, or, conversely, some fragments preserve only a few letters. These texts confirm the revival of the Hebrew language in Jewish community life, and enable to study medieval Jewish onomastics, notably different from that of antiquity. They also provide information about the social life of the Jews and their cultural diversity. 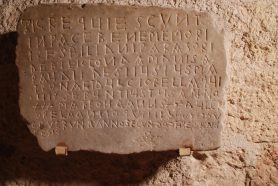 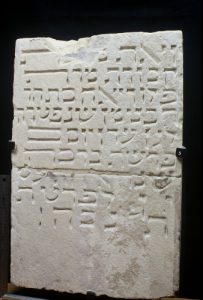 Paris provides the largest corpus with 24 dated epitaphs from 1139 -1140 to 1364, 57 undated and 27 lost ones, of which only the description survives. Most of them come from one of three Jewish cemeteries in the left bank of the Seine, discovered under the current Hachette book shop, located on boulevard Saint Michel. They demonstrate the commitment of Parisian Jews to their religious customs and to their culture, reflected in the use of biblical Hebrew names, at least for men, and in particular their adherence to the Hebrew calendar in order to indicate the date of death, contrary to what appears in epitaphs of antiquity. The study of the names of Parisian Jews, extended to those listed in Parisian Hebrew manuscripts of the fourteenth century, as well as in the records of the tax roll of 1296-1298, and archival material, all sheds a different light on Jews of Paris, their origin and their profession.